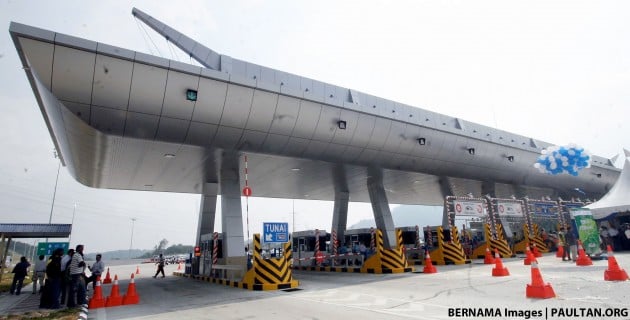 Reductions in toll rates for the Besraya and LEKAS expressways will take effect from 12:01am, January 1, 2023, public works minister Datuk Seri Alexander Nanta Linggi has announced, according to Bernama.

The reduction is by as much as 15 sen for Class 1 vehicles passing through the Loke Yew and Mines toll plazas (North and South) on the Besraya expressway, the report wrote. Meanwhile, the toll rate for Class 1 vehicles on the LEKAS expressway has been reduced from 0.1811 sen per km to 0.1666 sen per km for the closed toll system, while the toll rate at the open toll system for the Ampangan toll plaza remains unchanged.

This means that the new toll rates effective from midnight tonight will be RM1.85 for Class 1 vehicles at any Besraya expressway toll plaza, while motorists using the LEKAS expressway will be charged RM7.80 in each direction.

“Through the restructuring [of toll rates] for these two highways, the government is able to save an estimated RM1.978 billion in compensation allocation during the concession period, and the allocation can be channelled to meet other basic needs of Malaysians,” Nanta said.

This reduction in toll rate was made following discussions and the agreement of the concession company for the two highways, IJM Corporation, that is in line with the cabinet’s decision that was made on December 21. “It is also part of the reorganisation of the structure and toll rates for the two highways involved,” the public works minister said in a statement.

Reduction in toll rates for the Besraya and LEKAS expressways, as part of reductions for six highways in total were announced in October at the official opening of the Damansara-Shah Alam Elevated Expressway (DASH), as announced by then-prime minister Datuk Seri Ismail Sabri Yaakob.