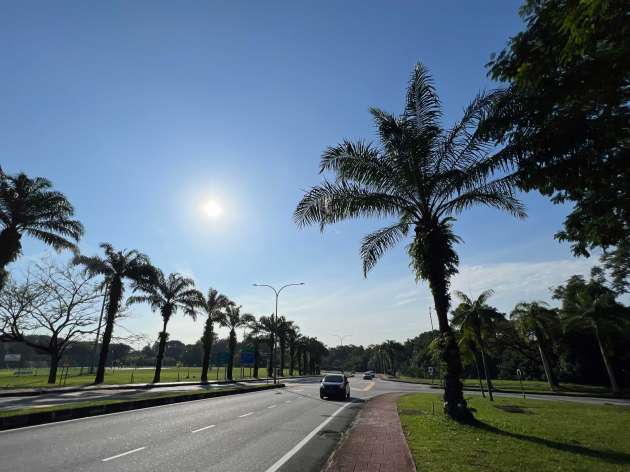 It was bright and sunny this morning, with the kind of clear blue sky with minimal overcast that begged for you to go out and take a stroll to warm your body up in preparation to face Christmas weekend. So that’s exactly what I did.

Two hours and close to 8km later, I felt refreshed, yet a little sick at the same time. My entire upper airway felt like it was covered in a layer of mucous. The blue sky made the day look like it was fresh and clean, but in reality the air felt a little thick, like it was a little powdery to be honest.

The source – internal combustion engine vehicle pollution, it’s everywhere. Even as I sit here writing this story on the first floor of a commercial centre while having a cup of coffee, the air is horrible thanks to the high volume of cars and motorcycles passing by.

Admittedly I put myself into this situation. After all, walking for 2 hours outside and sitting outside at a coffee joint are entirely optional scenarios. Activities that are “non-essential”, a popular phrase from not too long ago in the history of Malaysia.

But this is what many people have to go through everyday. Think of the kids that wait for their transport at school. Have you seen the massive traffic jam of cars with their engine turned on and idling? Or people who work in little kiosks next to a parking area. Or the stalls at highway rest stops. Or the security guards in a parking lot. Or the traffic police trying to ease the morning congestion.

In 2013, a 9 year old girl died from a fatal asthma attack in Britain. She lived near a major road in southeast London. A coroner ruled that air pollution was the official cause of death, because she had been exposed to levels of nitrogen dioxide and particulate matter in excess of WHO guidelines.

The main source of her exposure was traffic emissions. Her mother said that if she had been told air pollution was contributing to her daughter’s ill health, she would have moved. In the three years leading up to her death, she had gone in and out of the hospital nearly 30 times. An estimated 4.2 million deaths per year are caused by air pollution. A major source of air pollution that’s breathed in by humans are not caused by coal-fired electricity plants, but traffic pollution. And children are the most vulnerable due to their developing lungs, yet they breathe in an incredible amount of diesel particulate pollution while they wait for their transport, and while they sit in school buses or vans that aren’t properly sealed from traffic pollution. That’s at least 2 hours of exposure every school day, minimum.

It even affects humans before they are born. According to a WHO article, when pregnant women are exposed to polluted air, premature births are more likely. It also affects neurodevelopment, cognitive ability, and increases likelihood of childhood cancer and cardiovascular disease.

Research by scientists at the University of Aberdeen UK have found that unborn babies have air pollution particles in their developing lungs and other vital organs as early as the first trimester. Yes, air pollution has screwed up your baby’s lungs even before your baby has taken a first breath of air.

Ten paragraphs later, I think it’s about time I get to what I am trying to say. Yes, in a country where coal-fired power plants are used to generate electricity, electric cars are not truly zero emissions.

However, there are clear benefits to having coal burned for electricity away from where humans live, in a power plant that’s a lot more efficient with cleaner emissions output than the internal combustion engine that’s being started every morning and left to idle in the porch to “warm up”, allowing its emissions to seep into every house on the road where it is parked.

Overall zero carbon emissions is the end goal, a perfect solution, and will be good for the environment, but there are immediate health benefits to removing the source of all kinds of emissions (carbon, nitrogen oxide, soot particulates, etc) from where people live, where our children live, play, cycle.

There is this thing called the nirvana fallacy where we tend to compare actual things to unrealistic, idealised alternatives, or the tendency to assume there must be a perfect solution to a problem, choosing to reject a realistic achievable possibility in favour of waiting for an unrealistic solution that could be better because some part of the problem that needs to be solved would still exist after it were implemented. It’s like rejecting the use of seat belts because some people would still die in car crashes. 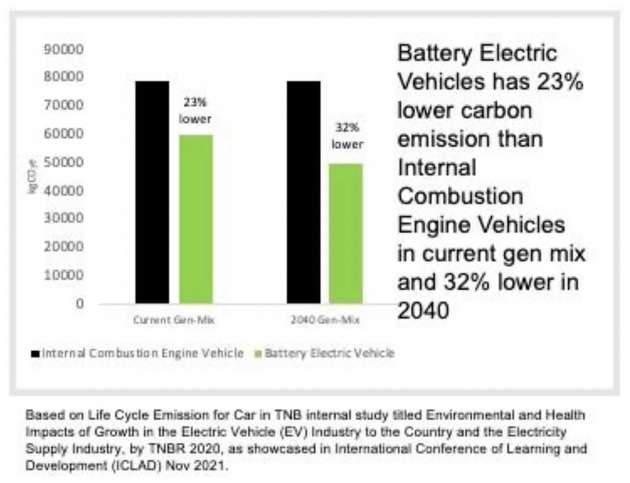 Our electricity generation mix will get cleaner, and so will electric car technology. Both electric cars and electricity will get less environmentally damaging to produce over the next decade.

According to a study by TNB, electric cars are already 23% cleaner in terms of carbon emissions (I repeat, this is just carbon) compared to ICE cars, and as according to TNB’s own plan to reduce reliance on coal power over the next few decades, it will improve to 32% by 2040 and it will only get better thereafter. The target is to be coal-free by 2050.

So yes, while on paper you see this figure of being only 23% cleaner, I guarantee if all the cars that line up outside the school to pick up your kids are electric cars instead, it will be 100% healthier for them and their lungs will thank you for it.